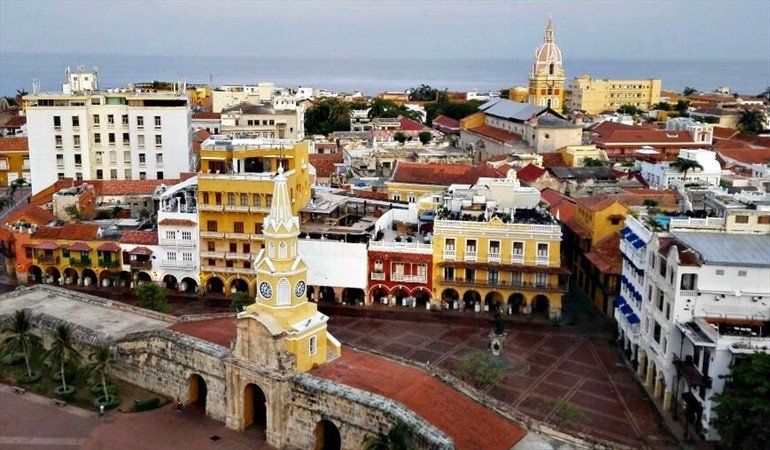 Students will immerse in Latin American culture and language through interesting activities such as:

This is a faculty-led travel course running from January-March long course with 10 days in Colombia’s Caribbean Coastal region.

During the course, we will examine significant notions and debates about Latin American cultural identity. Even though many of its nations share historical and political heritages, Latin America is defined by its ethic, racial and cultural heterogeneity and distinctive regional identities. We will focus on historical events and cultural productions from the colonial period to the present throughout the Spanish-speaking Caribbean South American. The structure of this course is primarily thematic but also chronological. The Caribbean South American is mostly known for civic-political unrest, such as Colombian violent civil conflict and and Venezuela’s radical socialist politics, nonetheless the region’s cultural resilience and non-western political philosophy remains overlooked. Students will engage with a variety of materials including Spanish chronicles, political manifests, letters, philosophical essays, literary works, and film. In addition, we will evaluate the ways that historical global influences and power relations, as well as an uninterrupted history of resistance and emancipation, have shaped Latin American cultural identity. Special attention will be given to the complexity of colonial legacies, nationalist projects, the rise of populism, and cultural globalization.

1) Non-travel. This component will function as any academic course, students will meet regularly on campus before and after travel segment, and will include a regular academic experience of reading, research, and writing.

3) Travel. This component includes lectures as well as excursion trips that relate to the subject material and cultural understanding of the region. In Colombia we will visit:

Departure from Logan International Airport and arrive in Cartagena de Indias, Colombia.
Our hostel will be located in the Getsemaní neighborhood, which is close to the walled city. The atmosphere and the place are very nice, as it is surrounded by bars, restaurants, and plazas. Student will share rooms with AC. A delicious breakfast will be included. 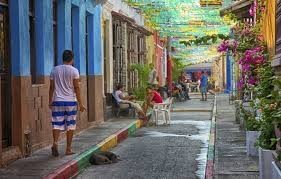 Our hostal in Getsemaní neighborhood

After breakfast, we will start the bike tour in the Getsemaní neighborhood and then visit some of the essential corners of Cartagena de Indias, its neighborhoods, and its port. We will observe examples of the military colonial architecture, such as the San Felipe Castle or the Portillo Fort. 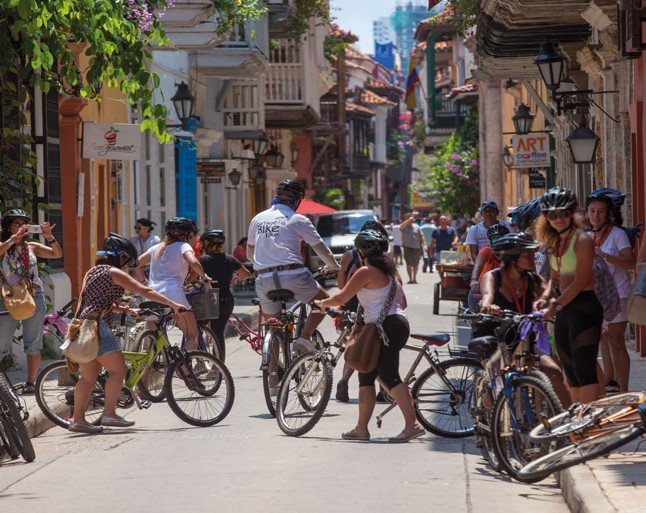 We will have the opportunity to see famous monuments, such as the sculpture of the old boots and the statue of the Indian Catherine, and many murals/street art along the way. Finally, the tour will take us through the streets of Getsemaní, the oldest neighborhood in Cartagena and the place where the independence of the city was declared.

After a heathy lunch in one of Cartagena’s the many comedores populares (community kitchens), we will tour San Felipe de Barajas Castle, the grandest fortress that Spaniards built in the mid-seventeenth century. We will explore most of castle including its sophisticated tunnels. 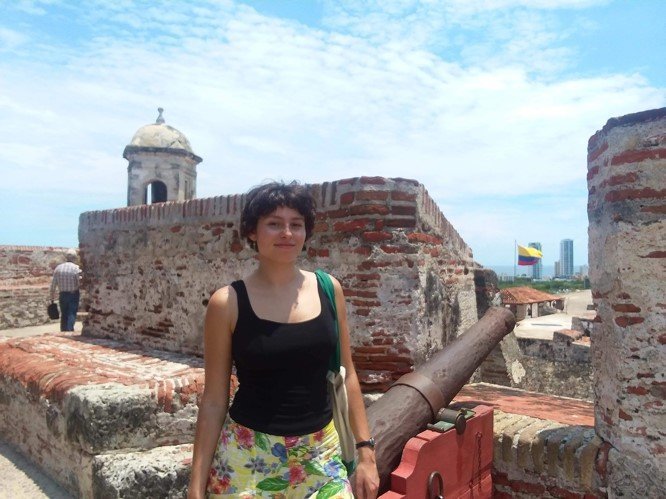 For dinner, we will indulge in Colombia’s world famous street food!

In the morning, we will tour the Convent Chapel of Mount Popa, an Augustinian monastery dating from 1610. The building was a strategic defensive enclave that suffered repeated attacks by pirates, including Francis Drake in 1585 and the English Navy. Years later, the convent was converted into barracks, where Simón Bolívar was one of its most famous guests. 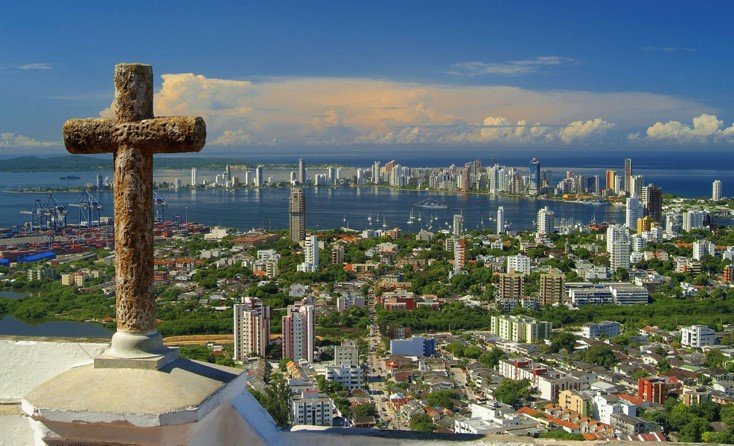 After lunch, we will visit the Cloister of Santo Domingo, the oldest and one of the most beautiful churches in Cartagena. Inside we will find a Christ carved in wood from the 19th century and a Virgin which has a crown adorned with gold and emeralds. We will also visit the Cathedral of Cartagena and the Sanctuary of San Pedro Claver, a noted anti-slavery and revolutionary priest. 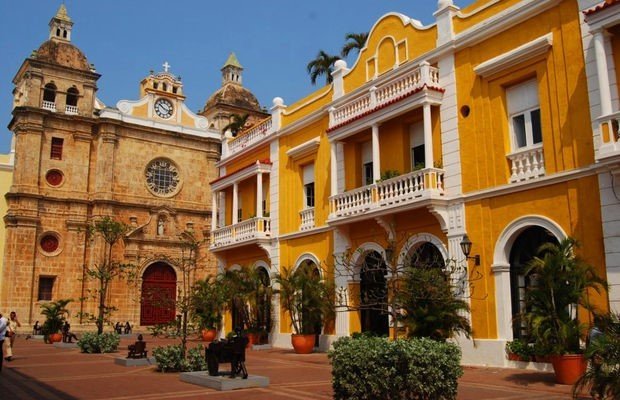 We will also visit the Palace of the Inquisition, one of the most important examples of institutional colonial power. This Baroque style house was a tribunal for the holy office to condemn anyone the Church saw as an enemy. It houses instruments of torture, along with documents, explanations, and paintings about the Inquisition.

We will end up our day with a visit to the El Museo del Zenú/Gold Museum, were we will learn about the Zenú people, its agricultural economy and cultural legacy. We will examine pre-Columbian pieces and gold jewelry making techniques. 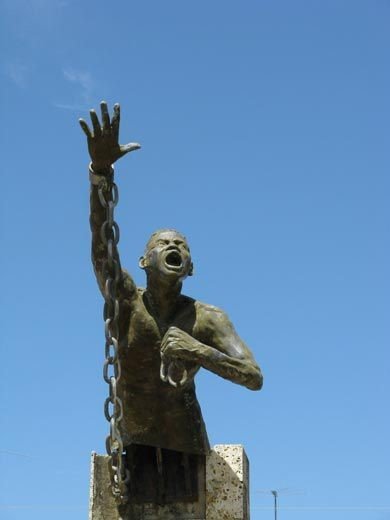 From Cartagena, it will take us about 1.5 hours to travel to San Basilio de Palenque. We will visit the village and the cultural center, where we will learn about the history of Palenque, American first village founded by fugitive slaves. We will learn about Palenquero, a creole language, Afro-Columbian rhythms and dances, and enjoy a typical Palenque dish for lunch. 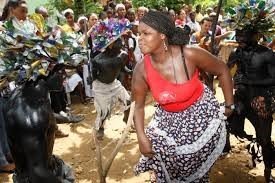 At our return to the old city Cartagena will have dinner at La Mulata, which offers a creative and delicious menu loyal to it's Caribbean roots. 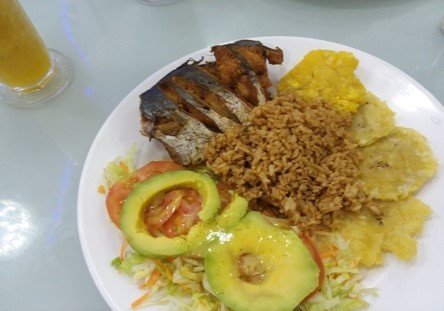 In the morning we will go on a historical, cultural, and literary audio tour concerning the life and work of the notable Colombian writer, Gabriel Garcia Marquez.

“Gabo" in a streel in Cartagena

We will discover the city's mysteries with a mixture of reality and fiction by evoking the characters in his novel, Love in Times Cholera, that is set in Cartagena. After lunch, we will go for a Murals tour through the bohemian neighborhood of Getsemaní, one of the most beautiful open-air museums in this area of the Colombian Caribbean. 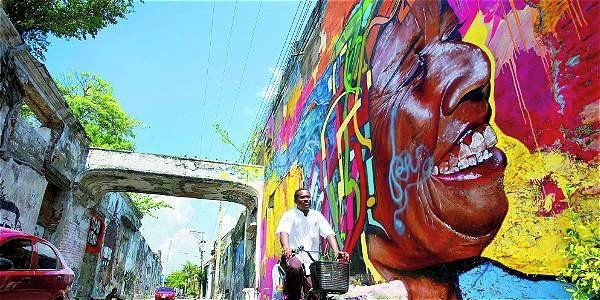 We we will learn about characters like the poet Jorge Artel, the dancer Delia Zapata Olivella, the liberator of slaves Benko Bioho and the leader of the independence Pedro Romero, whose portraits were created by thirty artists during the International Festival of Urban Art in 2013.

In the afternoon will attend a cultural event at the University of Cartagena de Las Indias, the oldest in the Colombian Caribbean and founded in 1827 by Francisco de Paula Santander and Simón Bolívar. (To be announced)

We will take a 45 minute boat ride from the Muelle Turistico de la Bodeguita, Cartagena’s old port, that will take us to Playa Blanca on Isla Baru. 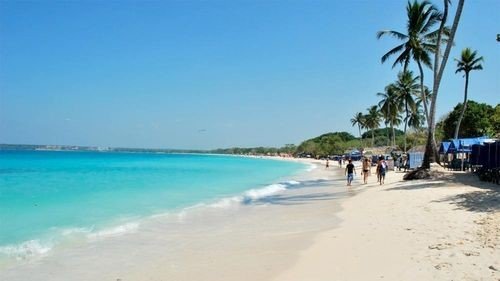 The tour takes a scenic route through the Islas del Rosario, stopping at one of the islands where we will snorkel. After an hour spent watching tropical fish in their natural habitat, the tour will continue to Playa Blanca, a paradise of white-sand beaches and crystal-clear waters, where we will enjoy a lunch of Colombian specialties, and tropical fruit!

Back in Cartagena dinner will on your own. It is time for students to explore the Cartagena at night!

Will have a typical regional breakfast at the Mercado de Bazurto. This market takes you out of the charming old city and into the depths of local life in Cartagena. The Bazurto market is gritty, rowdy and huge. It is filled with intriguing items and exotic Colombian ingredients not found in the supermarkets. 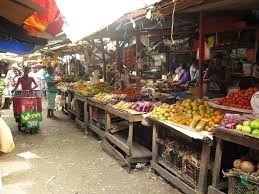 Walking by the market stalls, we will learn about the essential ingredients to prepare Cartagenera’s food, such as shrimp with garlic, cheese mote, and empanada with egg. Students will have plenty of opportunities to practice their Spanish!

Music and Dance. Colombia share its musical influence with other Caribbean nations including salsa, merengue, and reggaeton. While the most popular local rhythms are the cumbia and vallenato, Champeta is a genre of music and dance native to Cartagena. Students will have a music history lecture followed by dance lessons at Crazy Salsa.

Visit the fishing village of Santa Marta, the oldest city in South America. The city has a unique architectural colonial heritage, and great cultural legacy, We will stay at a hostel in the historic center, an ideal location to explore the city. In Santa Marta we will tour the Quinta de San Pedro Alejandrino, a hacienda-museum, built in the seventeenth century, famous for being the place where Simón Bolívar died on December 17, 1830.

At dusk, we will head towards the Malecón de Bastidas, a beach boardwalk where we will find many stalls selling typical sweets, and delicious street food, as well as refreshments, indigenous crafts and the cheerful music of soloists and bands with Afro-Caribbean rhythms. 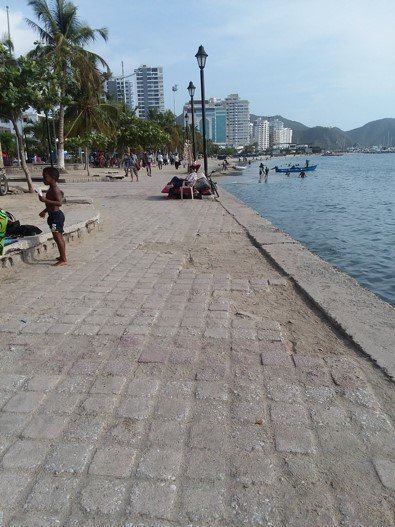 Departure from Santa Marta by car until we reach Tayrona National Park, is a paradise that offers wonderful beaches and it is also rich in history.

Once in Tayrona, we will walk along the beach and then follow the path through the jungle for 2-hours, until arriving to the archaeological zone of Pueblito Chayrama. 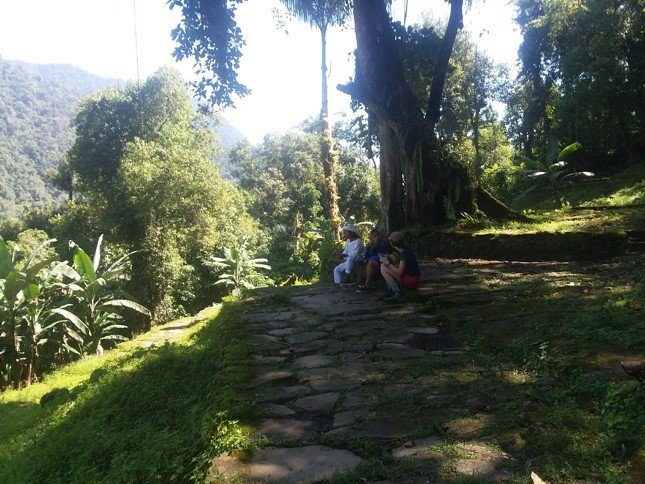 This small village belonging to the Tayronas (indigenous community that resides in this part of Colombia) and it is part a complex of numerous villages and hamlets spread throughout the Sierra Madre region, forming a large network that supports trade and other businesses.

After the hike, we will go to El Cabo San Juan, where we will enjoy the beautiful beaches, and have lunch. The tour continues to the natural swimming pool, and to Cañaveral, where the return to the city of Santa Marta.

At night we will have a traditional Colombian Cook party at the hotel’s terrace! 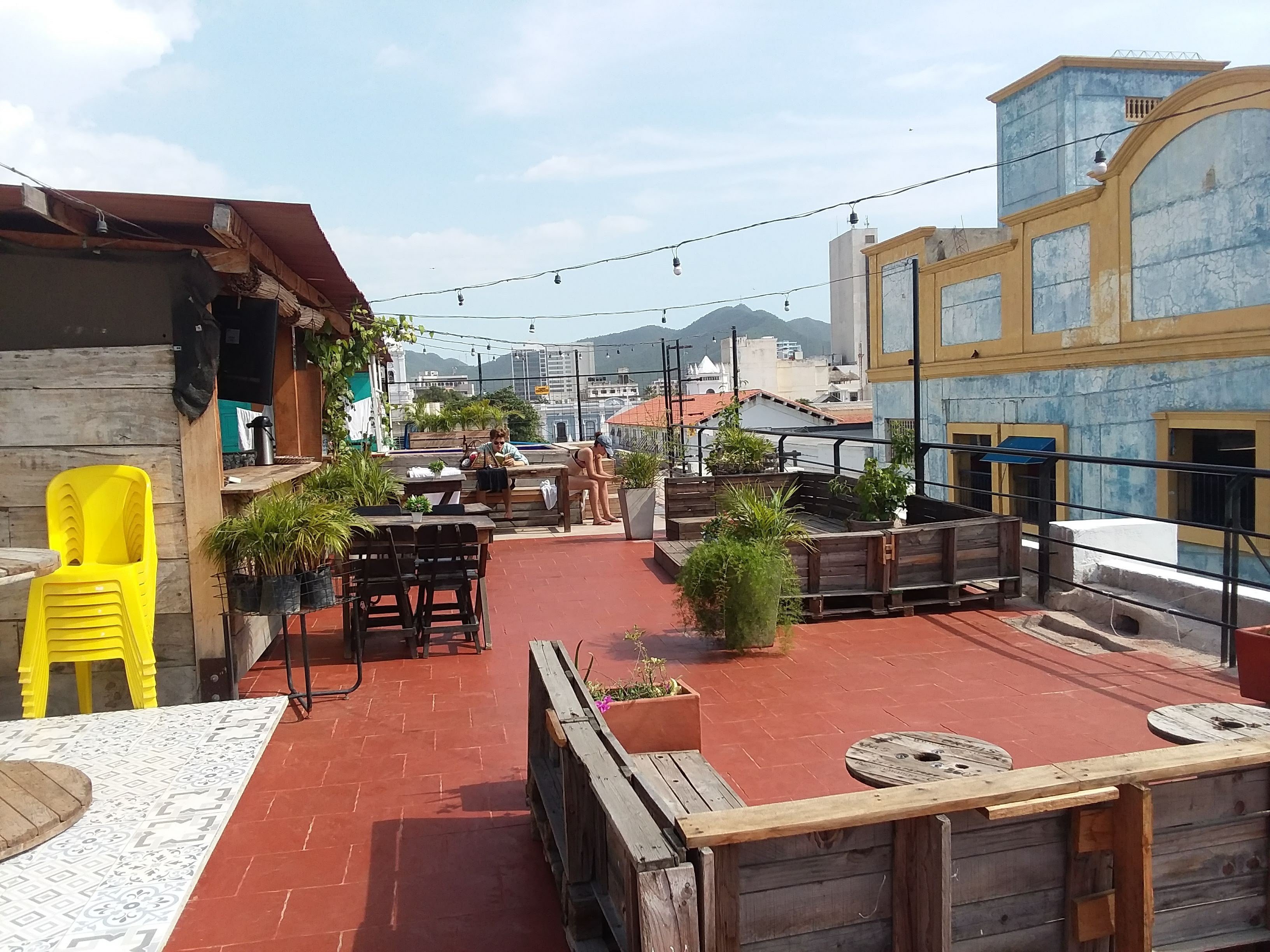 Our hostal in Santa Marta, Colombia

Day 10 (3/24) Return to Cartagena. Student will be own their own to explore the places of interest

The trip total cost is $2,000, including the following:

The cost of this trip will be paid in four installments between the end of September, 2018 and the end of January, 2019. Any cost saving will be provided to the students for their use during the trip. Two merit based scholarships of 542$ are available. Click here for more info.

Learn more about this opportunity during an information meeting in Fall 2018, where we will cover:

In the meantime, please contact Professor Bolívar if you have any questions at m.bolivar38@mcla.edu

Mariana Bolívar Rubín received her Ph.D. in Hispanic American literature and cultures at the University of Colorado, Boulder. She is currently an Assistant Professor of Spanish at Massachusetts College of Liberal Arts. In her current project, she is examining the representation of Afro-Caribbean religion in Latinx literature and film. As a Venezuelan native, she is fluent in Spanish and conversant in Portuguese. She enjoys backpacking and solo travel, Her journeys in Centro American and South American include Venezuelan and Colombian Andes, High Mountain Ranges of Colombia’s Sierra Nevada, Central American Volcanic Arc in Nicaragua, southeast Mexican jungle (primarily Oaxaca, San Cristobal, Palenque and the Yucatan peninsula), Sierra Madre mountains in Central Mexico, and the many desert wonders of the American West. 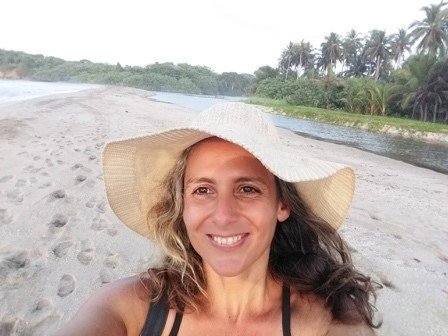