Haiti Trip Offers Profound Insight into Life beyond the U.S. 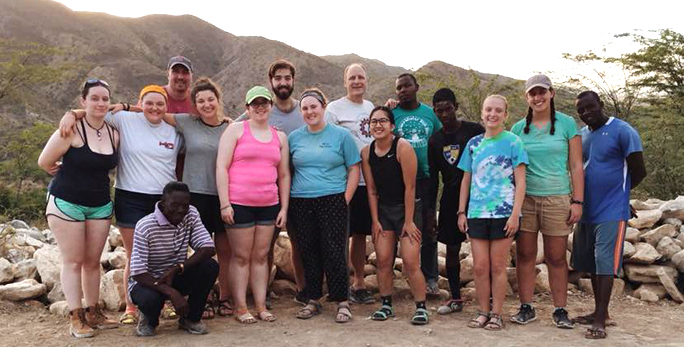 When nine students joined Spencer Moser, director of MCLA’s Center for Service and Citizenship, on this year’s Alternative Spring Break trip to Haiti, they expected to paint some classrooms inside a school in the village of Brely. However, they came home with an experience that was much more profound.

In addition to sprucing up the school, the students experienced firsthand how the people in the Haitian village live. There’s no electricity or running water: their lives lack many of the modern advances of the 21st – or even the 20th – century that those in the States take for granted.

If the group had brought in even some of the modern conveniences to use during their stay, Moser explained, “That would be an incomplete experience. That really set the tone of the immersion. We slept in tents on the ground, ate local food, and spent a lot of our time engaging in activities that are right in line with how the people there live.”

Their activities included three- to four-hour hikes, way out into the Haitian “bush,” or countryside, where they observed a way of life that had not changed in centuries, such as people tilling the land as it had been done for 1,000 years. In traditional “call and response” fashion, one person would call out, while the rest simultaneously hit the ground with their hoes.

According to Julianne Clarke ’20 of Monson, Mass., the trip offered a true immersion into the culture, which gave her the opportunity to really see what life is like for the villagers of Brely.

“It was incredible to see the distance the people had to walk just for clean drinking water,” Clarke explained. “Even then, they would have to boil the water before they could drink it safely. For us, it was an all-morning, exhaustive hike, but for the Haitians, it was just a day in the life, scaling mountains to get where they needed to go. The opportunity to see this feat, and to be an active participant in the journey, had the greatest impact on me.”

Back at the school, Clarke enjoyed meeting the Haitian children. “They were always grabbing our hands when we went out to play with them. They’d want to teach us clapping games, or learn a bit of English, or play soccer. Those interactions were the best part, because the kids were equally as enthusiastic to learn from us as we were to learn from them,” she said.

Like Clarke, Celine Manigbas ’18 of Floral Park, N.Y., looked forward to “a true cultural immersion.” She said, “Interacting with the children of the village made the greatest impact on me, because they reflect so much of the community and the culture. The children, like many adults in the village, were very welcoming and friendly, and I am glad I was able to witness their capacity for community, helping each other. They were so different than any child I have ever met before, or any other community I have been in.”

Samantha Johnson ’21 of Lee, Mass., enjoyed seeing children’s faces as they helped the students paint the classrooms. “The look in their eye of joy and accomplishment was just so amazing and heartwarming,” she said, “and it just reinforced why I want to become a teacher.”