Below (top), as an alumna, Rachel Quackenbush ’16 is an assistant softball coach for The Sage Colleges Department of Athletics, and (bottom) as a pitcher for MCLA. 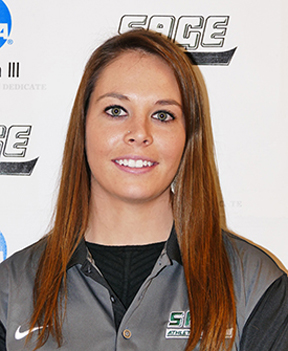 When she attended MCLA, Rachel Quackenbush ’16 studied psychology and played on the women’s softball team. As an alumna, she continues her involvement in both endeavors as a fulltime social worker for New York’s Department for Children and Families (DCF), and also part time as an assistant softball coach for The Sage Colleges Department of Athletics.

In addition to her psychology degree, Quackenbush earned a minor in social work. The classes she took in both programs helped her to prepare for her work at DCF, where she is a social worker who ensures child safety and connects families with the various services they may need.

“I also work with foster homes, residential placements, and children placed at home,” she said. “The goal of this job is always to reunify children and their families if it’s appropriate and safe.”

Quackenbush began her studies at Siena College in Loudonville, N.Y., but decided to transfer to MCLA because she desired a smaller setting, as well the ability to commute from her home in nearby Hoosick Falls, N.Y.  Her studies at the College included an internship at Williamstown Commons Nursing and Rehabilitation Center, and also at the Department of Children and Families in Bennington, Vt.

At MCLA, she excelled in the classroom as a Dean’s List student, and also on the softball field as a pitcher.

“I started playing tee ball at the age of 4. I was the only girl on the team, but as time went on my love for the game grew,” Quackenbush explained. At age 8, she decided to become a pitcher, and dedicated herself to that effort. By age 9, she was playing on multiple teams. Her efforts paid off. 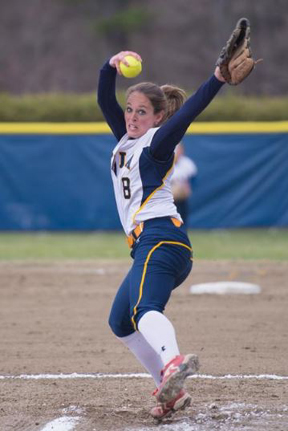 As a senior, she was voted to the Massachusetts State Collegiate Athletic Conference (MASCAC) First Team, then graduated as the holder of MCLA’s all-time career strikeout record, and ranked in a tie for most wins. She is the Trailblazers’ single-season strikeout leader, and added a personal-best 198 strikeouts in 2014 as a sophomore, as well as 179 as a junior. Also as a junior, she and her teammates won the MASCAC Softball Tournament Championship.

At Sage, Quackenbush primarily works with the pitching staff, helping them to improve their skill set. She also does her best to lead by example. “The best part for me is being able to see the pitchers be successful in an area in which they may have struggled. From personal experience, I know the feeling of achievement that comes when you have mastered a pitch.”

In addition to the championship win during her junior year at MCLA, Quakenbush said her most enjoyable experience as an undergraduate was the opportunity to develop life skills. “Being a student athlete presented me with many challenges, and I proved to myself that I am able to overcome obstacles.”

She recommends MCLA to those who desire to join a close-knit college community, where they may receive one-on-one help from professors. “My academic experience was very positive. All my professors – both in psychology and in social work – were very supportive of me as a student athlete. They were always flexible with game schedules and make-up work. I really enjoyed my time at MCLA.”