Above, Melanie Mowinski’s first card features President Franklin D. Roosevelt’s Four Freedoms. Below, Mowinski works at the press, and her second card of the project. 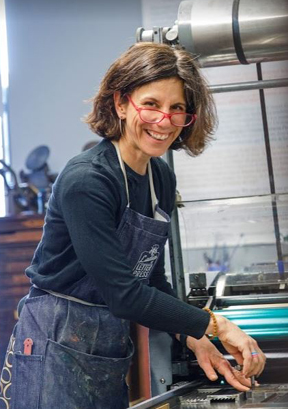 It started with a single card and an idea that Melanie Mowinski, associate professor of visual art, had after the 2017 Presidential Inauguration. A second card followed the next week, and soon she found herself involved in a project in response to different situations that emerged from an emotionally charged political climate.

Each week Mowinski would mail cards or email the images to interested recipients. Others would view her creations online. On Thursday, Jan. 25, all 50 cards may be viewed in MCLA Gallery 51’s first exhibition of 2018: “The 50 Card Project.”

“It’s really interesting to think about it now, a year later,” Mowinski said. “I didn’t know that I was going to keep this up for the entire 50 weeks, but I like making the cards. It was something that I started doing when I was based on Main Street, at the former PRESS Gallery.

“It seemed like a really good way to be mindful in the world, and to try to offer some hope in the form of printed paper,” she continued. “A big part of this was the idea that we all want liberty and justice for all. Sometimes things can get caught up in rhetoric that perhaps was taken differently than it was intended.”

The project also was in direct response to idea of the Pledge of Allegiance. “We’re pledging allegiance to the flag of the United States of America – one nation under God, indivisible, with liberty and justice for all. This project aims to remind people of that,” Mowinski explained.

Printed on the 1,800-pound, Vandercook proof press that once was the centerpiece of the former “PRESS: Letterpress as a Public Art Project” gallery on Main Street in the downtown, “The 50 Card Project” was created on this same press, now located in MCLA’s renovated Bowman Hall. 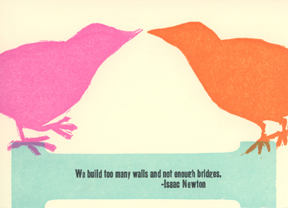 “These cards really built on what I did when I had ‘PRESS,’” Mowinski said. “Every month we would make these mantra cards that were inspirational and something that you might want to hang on your refrigerator to remind you about how you want to live in the world. I decided to use that idea as the foundation for these cards.”

The quotes Mowinski selected for each of the 50 cards came from a variety of people whose comments were bipartisan in nature. “But whoever I chose would somehow respond to whatever was happening in our country that particular week,” she said. The response was positive.

Many people found the cards to be encouraging, inspiring, and uplifting, Mowinski said. “The process was always really good for me. Printing is very meditative. Setting type is slow and printing is slow. The commitment to go into the studio every Friday helped keep me motivated.”

When the cards are viewed together, the experience is much different, she said. “Aesthetically, you can see the typography and color choices, as well as the themes and the images I selected. I had them all up on the wall as I worked, so I was watching the project unfold, myself. Overall, they do come together as a body of work in a way that is collective and cohesive.

“I’ve been asked, ‘What’s your 51? What’s next?’ I think I’d like this exhibit to ask the people who view it what they are going to do next. How are you going to stand up for what you feel needs to be stood up for? What’s your 51?”