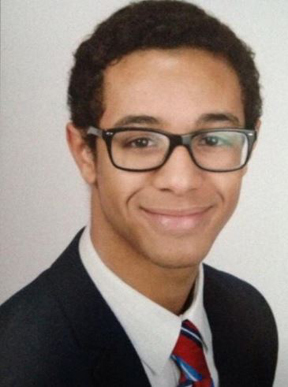 A number of visitors to MCLA's Facebook page likely have viewed a video that encourages students to enter the campus's Second Annual Entrepreneurship and Innovation Challenge. Produced with a "Shark Tank" theme, the video was just one of a number of short pieces shot by Messaoud Kerris '18 of Brookline, Mass., to enhance the College's social media presence.

A business administration major who concentrates in marketing and minors in economics, Kerris said, "There is business behind everything you do in life." His dream job is to work in real estate as an agent and an investor. In the meantime, he is MCLA's social media intern.

"I've been making videos for years," Kerris said. "I started making music videos and promotional videos from my iPhone 5 until I had enough money to buy the right resources."

As the social media intern, Kerris works to increase MCLA's online audience. This internship, he said, will help him in any career he decides to embark upon, "because it teaches me today's art of marketing."

The Entrepreneurial and Innovation Challenge promotional video took Kerris 25 minutes to shoot, and just an hour to edit. When his supervisor, Social Media and Marketing Manager Francesca Olsen, suggested using the "Shark Tank" theme, "I said, 'Let's do it,'" he said.

Kerris explained, "Every time I shoot a video I know exactly how I want it to be before I shoot. I don't write anything down: I simply begin directing and shooting on set, and adjust as I film. I am a one-man crew."

He also is part of a new organization on campus, the "Men of Color Initiative." The group's mission is to bring together and shine a light on the minority men at MCLA who do well in school. "It also helps minority men on campus seek help from people who look like them, so they know they are not alone," he said. A mentor to others in the group, Kerris gives them advice as he shares his college experience and knowledge about other activities, such as investing.

A member of MCLA's rugby club, Kerris enjoys competing against other teams from Williams College, as well as Fitchburg State, Lyndon State, Keene State, and other universities in the region. He picked up the sport as a first year student at the College.

"I told my friend I would try it out and ended up loving it. I have played ever since," Kerris said. "Rugby is the closest you can get to football at MCLA, so that's why I love to play. I love how it's very aggressive and physical, but friendly, all at the same time."

What's the best part of MCLA? For Kerris, it's "Meeting the friends I have made, and the relationships I have built with my teachers, which is the most important part of all," he said.

Kerris chose the College in part because of its affordability. "It allowed me to leverage my financials for investments so that I won't be a stereotypically broke college student when I graduate." In addition, MCLA is located in a "super nice community where I can focus on my school work without distractions."