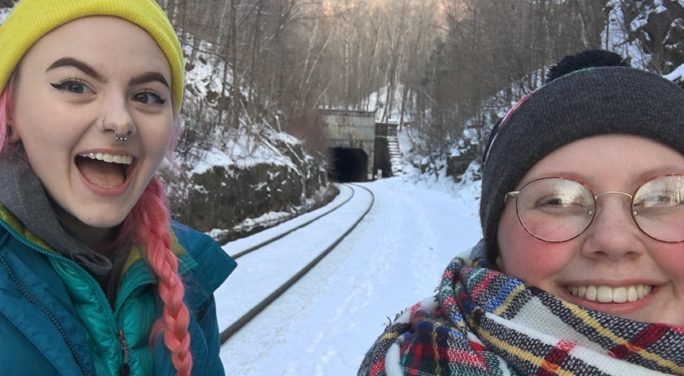 From left, Erica Wilcoxen ’19 and Cassie Lavoie ’18 at the Hoosac Tunnel.

As MCLA students, Erica Wilcoxen ’19 of Marlborough, Conn., and Cassie Lavoie ’18 of Bristol, Conn., had heard about the Hoosac Tunnel, but neither had visited the site, nor knew of its history.

However, thanks to a COPLAC (Council of Public Liberal Arts Colleges) digital course, “Storied Landscapes,” they developed a whole new understanding not only about the landmark structure, but how to develop a tool for presenting history that others might access more easily, as they learned about nature writing and developed digital tools such as website building.

A railway that burrows nearly five miles through the Hoosac Mountain Range, between the Western Massachusetts towns of North Adams and Florida, the tunnel was constructed between 1851 and 1875. According to myth, about 200 of the men who worked to build it lost their lives.

Both arts management majors with public history minors, Wilcoxen and Lavoie were interested in the tunnel’s dark history, the lore that is attached to it, and the nature that surrounds its West Portal. Both were excited to learn about its rich history through their research.

“Every time we visited the North Adams Public Library, we came away with more and more information,” Wilcoxen said. “Each piece unraveled more layers that we had not considered prior, and even now at the conclusion of the project, we still have so many questions and a further itch to find the answers.”

By creating the website (http://storyland.coplacdigital.org/mcla/), they hope to answer the same questions they had at the start, and to engage others who are curious about the tunnel.

Because of the myth about those who perished, “We really wanted to list all the people who died in or near the Hoosac Tunnel,” Wilcoxen said. “A lot of people did die there, but some of the numbers are a little skewed because some died nearby but not in the tunnel, or they died a few days later at home, as a result of injury or other issues. We wanted to clear everything up.”

Tragically, according to Wilcoxen, many of the men’s last names were partially or completely unknown. “Their names, nationalities, and history are lost to time, because we simply just don’t know who they were,” she said. “The importance of documentation – and specific, clear, concise record-keeping, is something I really learned during this experience.”

The most surprising takeaway for Lavoie was the challenge of having “too much” material to work with. “We had difficulty in deciding on what we should be focusing on for our website because everything seemed so important,” she explained.

Lavoie’s favorite parts of the experience included the opportunity to work with someone who was as interested in and passionate about the Hoosac Tunnel as she was, as well as her participation in the online classroom.

In addition, “I was able to develop a new understanding and a tool for presenting history to the public for greater access,” Lavoie said. “This course helped me develop my research skills, as well as enhance my ability to weave poetic and academic language into my nature writing. With the help of Storied Landscapes, I have gained new knowledge of how to interact with natural spaces through a digital lens.”