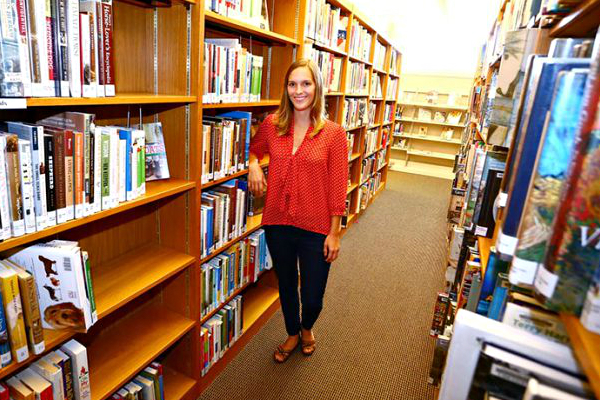 "Librarians are very in tune with their communities and there’s been a big push lately to be community facing. It’s always been about the connection you make with your community and patrons,” says Sondra Murphy '08.

At MCLA, Boylston, Mass., native Sondra Murphy ’08 was an English major with a concentration in creative writing and journalism. Because she loved books, Murphy thought a journalism career might be in her future, but that grad school probably wasn’t.

“If it weren’t for my professors at MCLA, I wouldn’t have gone on to grad school,” said Murphy. It wasn’t until they planted the seed and her father presented the idea of being a librarian that Murphy decided to get her master’s in library and information science at Simmons College. “I wouldn’t have been ready emotionally or responsibility-wise if it hadn’t been for MCLA,” she said. “It was very formative for me.”

“I began college at MCLA as an introverted, shy, anxious person,” said Murphy, “and I left there with experience in a wide array of liberal arts. I got involved in things I never knew I was interested in like dance, radio, film, theater — all of those things were there for me. I was co-chair of the photography club for several years, so I gained a lot of skills in working in teams and groups, and that leadership primed me for my library work.”

She also worked part time at the Freel Library. “I became close with several librarians there, and it probably informed my current position,” she said. Although academic libraries can be very different from public libraries, Murphy said she gained a lot of skills by working there.

Murphy secured a job as the children’s librarian at the Oak Bluffs Public Library on Martha’s Vineyard two weeks after graduating from Simmons. Although the library was small, Murphy could tell it was a point of pride for the town. “Having a vibrant and beautiful library says a lot about the community and what their priorities are,” she said.

“I went into it thinking being a librarian was more about books, but I learned very quickly on the job that it was so much more than that,” said Murphy. “A lot of people assume that, if you’re a librarian, you have to like books, but librarianship is changing exponentially. Now, it’s not enough to like books, you have to like people, especially in a public library where you work with people from all walks of life. That’s one of my favorite things about it.”

After working in Oak Bluffs for five years, Murphy served as the youth services coordinator for the Worcester Public Library and took a year off to travel through Asia before taking the helm of the Leominster Public Library in February 2018.

Libraries, said Murphy, are transforming from repositories of books and materials into vibrant community centers. “What’s exciting to me is in what the library will be offering 5-10 years from now,” she said. “It’s a very fluid space. I think and hope books and materials will still exist there in the future, but its mission and vision might be very different. Librarians are very in tune with their communities and there’s been a big push lately to be community facing. It’s always been about the connection you make with your community and patrons.”

As libraries continue to offer more varied programming, Murphy said she has had to become part manager, part visionary, and part event planner. “I had all of those skills but I didn’t know I had them,” she said. “It’s been the perfect career for me.” Above all, she said, she wanted a career where she knew she was doing good for the community. “At the end of the day, we’re doing good work and that’s what’s most important to me.”