Securing a Job at One of the Big Four, Before Graduation 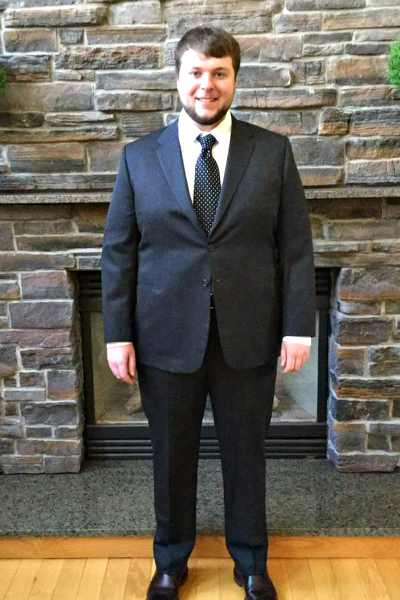 Alexander Mitchell '19 acknowledges that accounting is one of the majors at MCLA in which students are being hired right out of the gate. “I knew it was a job in demand,” he said, “but I didn’t know it would happen so fast. It’s a relief and it’s also motivating — it’s pushing me to learn and try even harder.”

Two of the most important decisions facing graduating college students are where to live and where to work. MCLA senior Alexander Mitchell already knows the answers to those questions: Hartford, Conn., and Deloitte.

Mitchell, who is originally from Hancock, Mass., and attended Mount Greylock High School, didn’t know the answers to these questions when he started college. In fact, he wasn’t even an accounting major. Mitchell received an associate’s degree from Berkshire Community College, where, at first, he was interested in studying criminal justice. But after realizing it was not the field for him, he used MassTransfer and began taking accounting classes at MCLA in the fall of 2017.

After a family member suggested he look into Deloitte, Mitchell did some research. He knew it was a large company—one of the Big Four accounting firms, with 100 national offices and countless offices overseas—and one that his professors talked about. The company focuses on financial planning, auditing, and tax and risk management, and they work with the S&P 1000 — the top 1,000 companies in the world. He reached out to Deloitte’s recruiting team and filled out an official application. After three phone calls and many emails, Mitchell traveled to the company’s Hartford office last month for a series of interviews.

That was on a Friday. By the following Monday, they’d emailed him with an offer. “I went in for two-and-a-half hours of interviews,” Mitchell said. “I had to decide if I wanted to join the audit department or the tax department, and I got to meet with senior tax and audit members, and the tax and audit teams, and ask them questions.” Mitchell ultimately decided to join the tax department, and he’ll move to Hartford right after graduation in May to become a tax consultant for Deloitte.

Mitchell said the people he met at Deloitte helped make his decision easy. “They were excited and it was nice to know that they wanted me, too, and that I was going into a place that was going to train and teach me so well,” he said.

Mitchell credits MCLA’s business department for giving him a strong foundation in accounting, and his professors for their guidance and mentorship, including the late Professor Gregory O’Connor, and professors James Moriarty and Thomas Whalen. He thanks Tara J. Barboza, MCLA assistant professor of accounting, for such informative courses, and for giving him advice on which classes to take. Professor Barboza helped him find an accounting internship at the Clark Art Institute this past summer and helped get his resume ready to apply there and at Deloitte.

“Having a summer internship really helped,” Mitchell said, “because I was able to go into my interviews and talk about that.” Mitchell’s responsibilities at the museum included collecting all cash from admissions and stores, as well as membership income, making various income reports, then reconciling and recording it all in accounting software. He paid the museum’s bills, wrote wire letters to JP Morgan for foreign vendors, and entered departmental budgets. “That gave me my first taste of working in a business environment, learning the terminology,” he said. “It really got the ball rolling for me.”

Mitchell acknowledges that accounting is one of the majors at MCLA in which students are being hired right out of the gate—or before that, in his case. “I knew it was a job in demand,” he said, “but I didn’t know it would happen so fast. It’s a relief and it’s also motivating — it’s pushing me to learn and try even harder.”