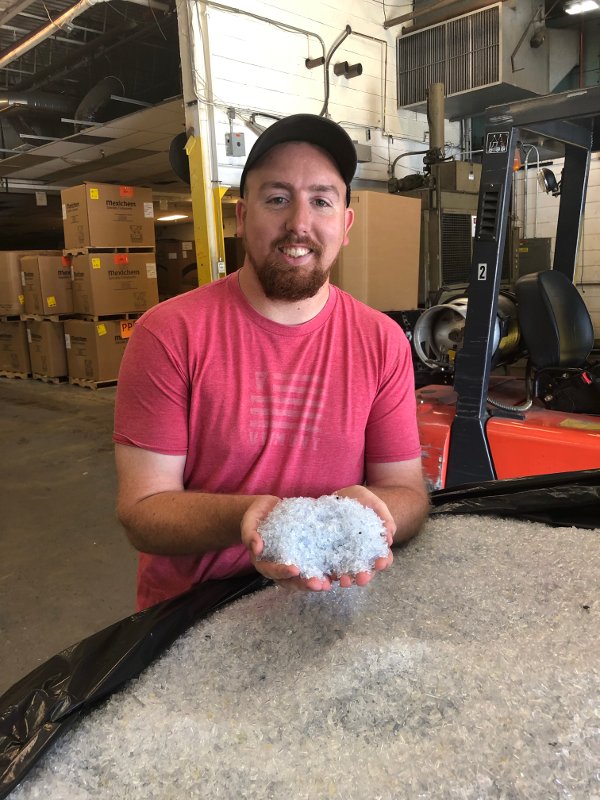 “When I first started at Adirondack Plastics, a normal truckload (of recycled plastic) was 20-30 percent higher in value than what it was when I left,” said Brian Ellithorpe '13. “Seeing another industry where they were just seeking a manager was another opportunity to learn.”

As challenges around recycling in America grow ever more complicated, Brian Ellithorpe ’13 has had a front-row seat.

Until recently, Ellithorpe was general manager at Adirondack Plastics and Recycling in Argyle, N.Y., where he began his career after graduating, working in environmental health and safety and in sales. “I thought that there was one type of plastic growing up,” he said. “I quickly learned that not all plastics are equal.”

Some background: The recycling industry in America is changing as other countries restrict imports of U.S. plastics, once a common and inexpensive way to deal with these materials. Now, the U.S. has to find somewhere to send or process the plastics it once primarily sent to China, which is creating a bottleneck and increasing costs across the board.

Married and expecting a child, Ellithorpe, who lives in Cambridge, N.Y., saw his industry changing and pivoted to a career as a night manager at U.S. Foods in Clifton Park, N.Y., where he has worked since June.

Adirondack only recycles post-industrial materials, not post-consumer materials, so it does a lot less cleaning and sorting than you might see in a facility that processes our discarded bottles and cast-off containers. Recycled plastic is ground down into pellet form, which makes it easier to melt down into new items or resell for other purposes.

“When I first started at Adirondack Plastics, a normal truckload was 20-30 percent higher in value than what it was when I left,” he said—but the labor rate to and cost of grinding down those materials to ready them for reuse stays the same. “It’s a tough margin,” he said. “Seeing another industry where they were just seeking a manager was another opportunity to learn.”

Further complicating matters is the fact that many materials employ several different kinds of plastic to create a final product (a simple household item like your toothbrush can contain four or five different types). Those all have to be isolated; Ellithorpe said he spent time at Adirondack trying to convince clients to simplify their packaging so it could be more easily reused.

“I think there’s going to be a change,” in how we package items in the U.S. now, Ellithorpe said. “I think we’re going to start seeing more glass or more paper. Plastic is still going to be used, but I think if we use more common grades of plastic, recycling would be less of an issue.”

An environmental studies major at MCLA, Ellithorpe appreciated the teamwork that can come as a result of small class sizes—and helped him eventually manage his own work team of a dozen people. “Having knowledge of the environment played a large part in getting my foot in the door,” he said.

A liberal arts education is designed to prepare you for these kind of career changes—and Ellithorpe encourages current students to diversify their talents to prepare for the job market. “Think of a job you want to do, and think of other divisions within that job. It’ll make you more valuable as an employee if you say, ‘oh, I have some Quickbooks experience!’ or some basic human resources experience, and so on. Sometimes it’s smaller stuff you don’t think about, but it plays an important role.”