How Aimée Hudon ’13 Fell in Love with Fungi 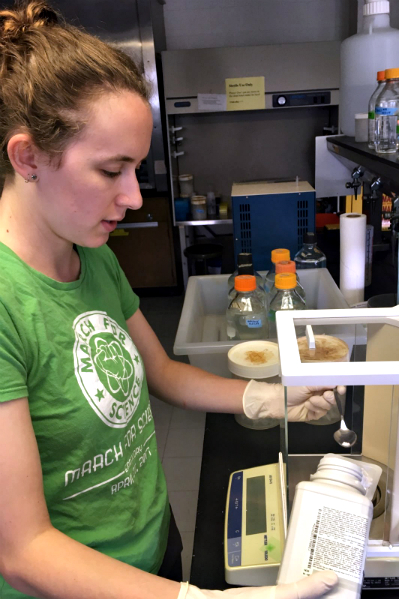 After graduating from MCLA with a bachelor’s degree in biology with a concentration in biotech, Aimée Hudon ’13 went on to earn a master’s degree in mycology and forest pathology at the State University of New York College of Environmental Science and Forestry (SUNY ESF) in 2019. Since September 2019, she has worked as a plant propagator for Nourse Berry Farms in Whately, Mass.

“I got involved with mycology while studying for my master’s, and that’s when I fell in love with mushrooms,” she said.

Hudon said there is a common assumption that all fungi are mushrooms, and compares it to how all rectangles are squares but not all squares are rectangles. “Mycology is a pretty young science compared to botany or zoology,” she said. “Fungi have only had their own kingdom for less than 50 years. Until we had access to DNA sequencing, there wasn’t much we could learn about them. Scientists used to think they were lesser plants, but they’re actually a really diverse group that is very different from plants, and are more closely related to animals.”

While at MCLA, Hudon took a microbiology class with Biology Professor Dr. Ann Billetz that taught her the basics of bacteria and aseptic techniques so that she could get a biology laboratory job immediately after graduation.

She’s back in the lab again at her current job, albeit on a farm. When most people think of farming, they often picture someone in overalls on a tractor, but Hudon wears a lab coat and uses micropipettes to mix media. “Typically, in propagation work, you’re taking a cutting and rooting it in soil, but I’m using tissue culture, which is a smaller and more sterile environment,” she said. The sterilized plant tissue and stem cells are introduced to and grow up in a jelly medium. That way, they can get the nutrients they need before acclimatizing them in the soil. “You get a lot of plants more rapidly than you would using a cutting,” Hudon said. “The plants also survive better.”

Hudon said she only learned of the type of job she has now while in grad school. She’s not aware of many berry farms propagating plants this way because of the resources it takes to set up a lab. There must be a sterile environment, and technicians who know how to handle the plantlets and properly transfer them without bringing in contamination.

Although her day job is in the science field, Hudon continues to be a lover of the arts. While at MCLA, she minored in art, which is something she said keeps her passionate about life. She also joined many clubs, including the theater groups Harlequin and Yorick. “It was nice that I could be a biology major and also involved in the arts — be both a theater geek and a science nerd!”