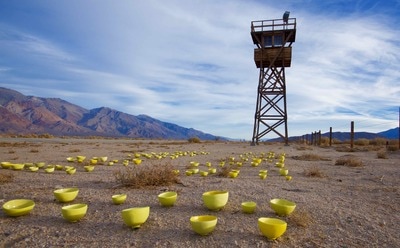 Visit the Arts Management online archive of this exhibition.

Read the Artist's reflection on her experience working with MCLA

Born in New York City to Japanese immigrant parents, artist Setsuko Winchester, has worked as a journalist, editor and producer at NPR on shows like Morning Edition and Talk of the Nation before moving to Western Massachusetts in 2006 to pursue a life-long interest in the ceramics and visual arts.

Photographs from the Freedom From Fear/Yellow Bowl Project will be on view from September 28- November 19. All are welcome to attend the opening reception on Thursday, September 28 from 5-8 pm. The exhibition will center on all the research Winchester has done around the history not only of the Japanese internment camps, but more broadly around Asian-American civil right issues over the last century. The bowls and objects will be installed in Lenox, MA at The Mount, Edith Wharton's home, from June - October. Gallery 51 will host an artist talk on October 12 (time TBA). On October 26 at 6pm at Gallery 51, MCLA faculty and students will share selections from the interdisciplinary collection of essays that will be published to coincide with the exhibition. In addition, a public roundtable discussion on November 14 (Murdock Room 218, MCLA Campus at 7pm) will explore the history of immigration orders in the United States.

Winchester decided to take 120 handmade fragile tea bowls, ceramic tea bowls, packed inside two enormous boxes as her “traveling” objects to places that were not famous or glamorous, but places most people had never heard of nor would probably ever go. By exposing these places of “fear”, Winchester hopes we can finally exorcise the shame and guilt, and move forward rather than blame the victim or shame the oppressors. More information can be found at can be found at http://www.yellowbowlproject.com/.

Featuring the work of Flipbook artist Tom Olson who uses flipbooks to weave tales of love, loss and other investigations into the human psyche and the absurd by spending countless hours drawing hundreds of pages to arrive at a profound three seconds. This will be the first time they have been exhibited and the show will include video and print presentations.

Olson's stories include "The Beast and the Lightning Bolt," "How the Sun Becomes the Moon," and "What Maps Do When Nobody's Looking." One flipbook examines the struggles of a Hegelian and a neo-Platonist facing the same intractable dilemma; while another series follows the adventure of little circle seamlessly morphing between an orange, the planet Saturn, and other objects.

Across time immemorial, humans have looked up at the sky and wondered what lies beyond. We have prayed to gods above, looked through telescopes at distant galaxies, and pondered the very origins of our existences. For "Cloud Headed," a selection of artists offer their own mixed-media visions of the view beyond our planet and how we look towards that destination. Whether people in prayer, depictions of heaven, constellations and astronomical imagery, or a more singular vision, these artists are examining both experiences beyond our daily comprehension and what investigating those experiences looks like.

Levi is a visual artist investigating perception, finding and unfinding. This summer he will introduce  Babel's Bricks, Cloud Headed and 3 Second Stories to the Berkshires. For more information about Corwin and his works, visit www.corwinlevi.com and find him on instagram @corwinlevi and @all.nine.legs. 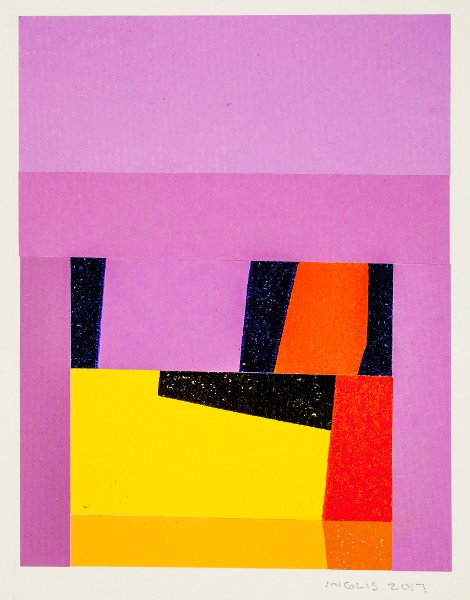 View additional images from the exhibition.


Remember, as a kid, when you played with toy blocks? Old wooden blocks, Erector sets, Lincoln Logs, Legos, or Mine Craft filled countless hours of childhood afternoons and summer vacations. Artists have continued to nurture the impulse of putting parts together to make a more wonderful whole. Lines make a drawing, strokes make a painting, pieces make a sculpture, and seconds stacked on seconds make a video. What if, though, artists created works AS the building blocks? For Babel’s Bricks, artists in a variety of media are interpreting the idea of artwork as building block. Additionally, there will be a component of the show in which viewers can construct their own works out of a selection of various blocks. By putting these disparate construction elements into a whole, the show will remind us that an aggregate of various systems has the power to be greater than its parts, whether individually or in sum.
Artists: Sarah Burris, Rodney Carswell, Brittany De Nigris, Sarah Fagan, Marc Ganzglass, Maggie Gourlay, Paul Inglis, Roger Feldman, Katie Loughmiller, Afton Love, Susan Marie Dopp, Matthew Northridge, Heidi Pollard, Ryder Richards, Pam Rogers, Megan Suttles, Max Spitzer, Caleb Taylor, Natasha Van Nettern and Stephanie Williams.


Remember, as a kid, when you played with toy blocks? Old wooden blocks, Erector sets, Lincoln Logs, Legos, or Mine Craft filled countless hours of childhood afternoons and summer vacations. Artists have continued to nurture the impulse of putting parts together to make a more wonderful whole. Lines make a drawing, strokes make a painting, pieces make a sculpture, and seconds stacked on seconds make a video. What if, though, artists created works AS the building blocks? For Babel’s Bricks, artists in a variety of media are interpreting the idea of artwork as building block. Additionally, there will be a component of the show in which viewers can construct their own works out of a selection of various blocks. By putting these disparate construction elements into a whole, the show will remind us that an aggregate of various systems has the power to be greater than its parts, whether individually or in sum.

INSIGHT celebrates the work of emerging graduating artists. During this process, students learn how to display and install their art, advertise for the show and more. The idea behind the exhibition comes from a quote by Malcolm Gladwell, a journalist for The New Yorker, who wrote: “Insight is not a light bulb that goes off inside our heads. It is a flickering candle that can easily be snuffed out.”

In that delicate balance of keeping ideas, momentum, passion, engagement, creativity, hope, and vision lit, “INSIGHT” is both an exhibition about finding paths and considering possibilities, according to the show’s artists. The Senior Art Show serves as the annual culminating event that provides graduating artists with the tools they will need to further their careers. INSIGHT remains in view through May 21 at Gallery 51, located at 51 Main St.

This year’s Massachusetts College of Liberal Arts (MCLA) “Advanced Museum Studies” course exhibition, “Critical Mass,” will feature everyday objects from the collection of Harley Spiller, a renowned collector with thousands of diverse, everyday objects – from spoons to Metrocards and gum to money.

With the goal to rethink the significance of the mundane, students in MCLA’s “Advanced Museum Studies” class designed opportunities to build awareness of the objects that often are taken for granted. Spiller’s prized collection previously included more than 40,000 Chinese food menus that earned him a Guinness World Record.

Critical Mass explores the value of seemingly insignificant objects when amassed in large quantities and placed in specific contexts. This theme emerged from a curatorial consideration of what lends importance to any given object. Interactive components of the exhibition will allow viewers to document personal relationships to objects, and invite them to contribute and thereby elevate their own belongings. Critical Mass remain on view through May 21 at MCLA's Design Lab, located at 49 Main St.

Massachusetts College of Liberal Arts (MCLA) Gallery 51 is pleased to announce that it will present the collaborative exhibition “Biotope: Friends, Life Forms, Landscapes” featuring the artwork of accomplished artists from several regions across the United States.

The public is invited to attend a free opening reception on Thursday, Feb. 23, from 5 to 7 p.m. at MCLA Gallery 51.  The exhibition will remain on display until Sunday, April 23, 2017. 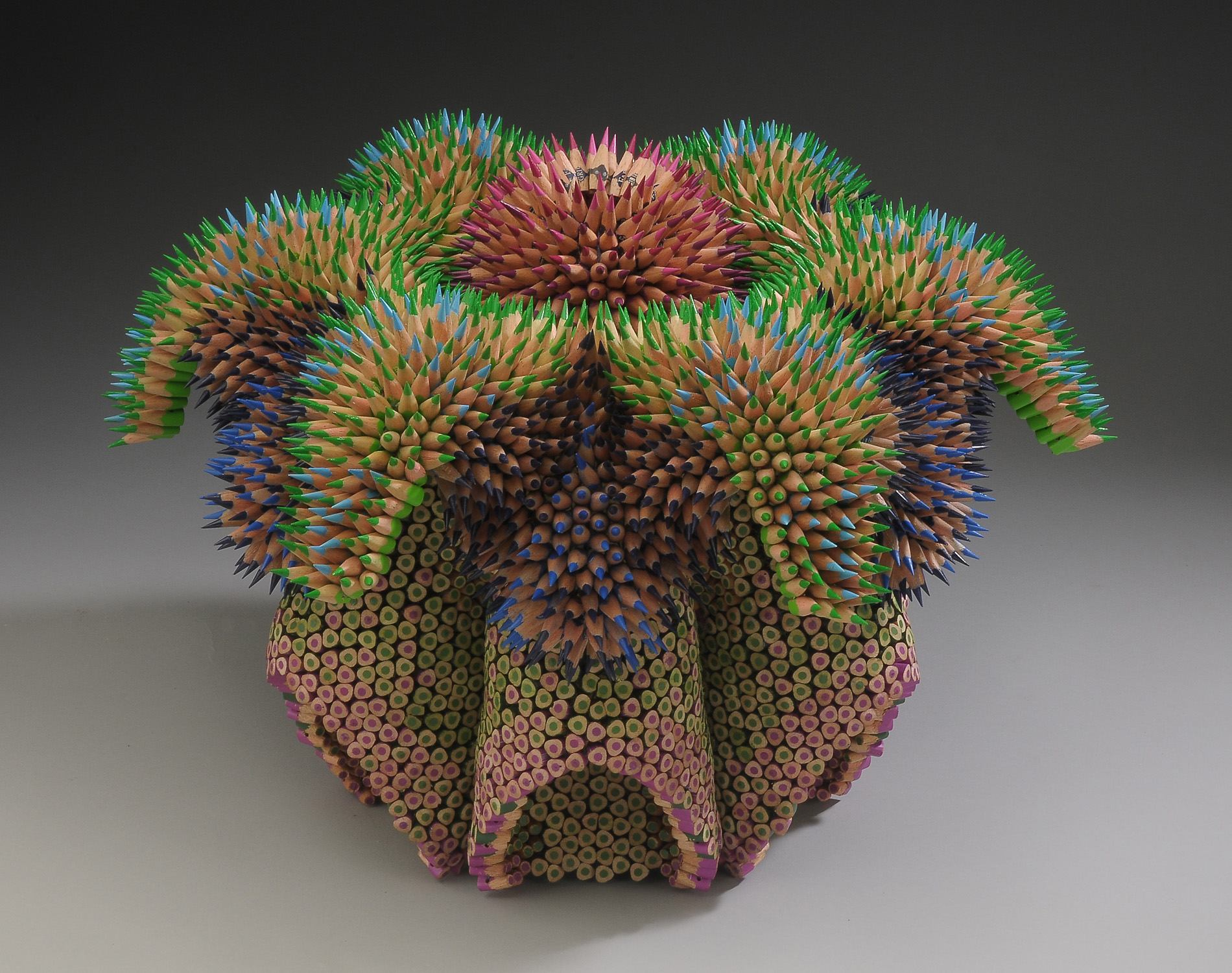 “Biotope: Friends, Life Forms, Landscapes” showcases the creative output of over a dozen artists.  The exhibition, which is being organized by Richard Harrington, a visual artist from North Adams, features works from a wide range of artistic mediums, including painting, photography, sculpture and printmaking.

All of the work exhibited as part of “Biotope: Friends, Life Forms, Landscapes” engages in some way with a particular living environment.  These regions of the earth, or biotopes, have a recognizable uniqueness which has inspired each individual artist to depict or capture the spirit of these places.

While planning the exhibition, Harrington “immediately thought of several friends who’ve done very different things,” but each of whom at one time or another in their artistic trajectories “was involved with living things and places.”  According to Harrington, “Biotope isn’t an exhibition about abstraction. It also isn’t specifically a show about painting, photography or the other disciplines of my exhibitor friends.”  Instead, Harrington envisioned an exhibition that maintained “a balance where no approach would dominate, but where some threads of continuity would be recognizable.”

Ofa Atu is both a solo exhibition and a public art project. The exhibition combines a series of the artist's paintings with screen prints produced by members of the local community during a DownStreet Art project Ostraff ran throughout the summer of 2016. Read more about the show via this Berkshire Eagle article. 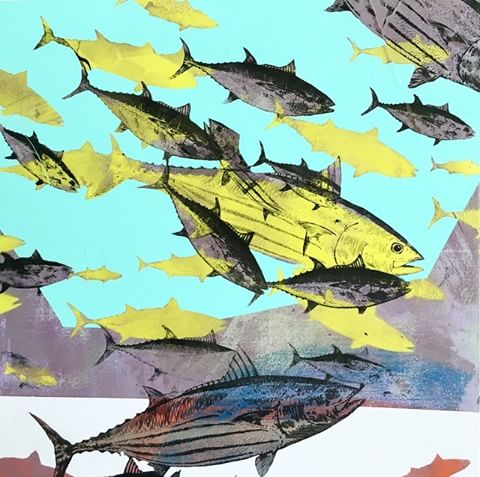 "I was a teenager living on a small island in Tonga when a man named Hiko called hundreds of tuna to him. Before I met Hiko there was a fierce hurricane that wiped out his village's food. Hiko one night had a dream and visit from the youngest son of the first Tui Tonga. He taught him how to call the ‘Atu (skipjack tuna) to him to feed his people. There were rules they would need to follow and if broken then he would not be able to call the fish again until the people had changed their hearts. For 21 years Hiko was able to call to the ‘Atu and the people in his village followed the rules. Then one day Hiko went out and called the fish, people took more than they needed and sold them, they broke the rules, and I was there. As a result Hiko said it would be a long time before he could call the fish again. I was recently reminded of this event through the work my brother Zac did on this story for his MFA thesis in creative writing. After reflection I saw places in my life where parallels exist and though I don’t live near the ocean I see the equivalent of the ‘Atu all around." -- Josh Ostraff

Josh Ostraff was born in Seattle, Washington. He has lived and traveled around the world with his family but claims Utah as his home. He received his BFA at Brigham Young University, his MFA at the University of Minnesota, and he currently teaches as a Visiting Assistant Professor of Art at the Massachusetts College of Liberal Arts. Josh is a multimedia artist who has exhibited his paintings, drawings, films, and art books both internationally and nationally.

See more of the Josh's work at: http://www.jostraff.com