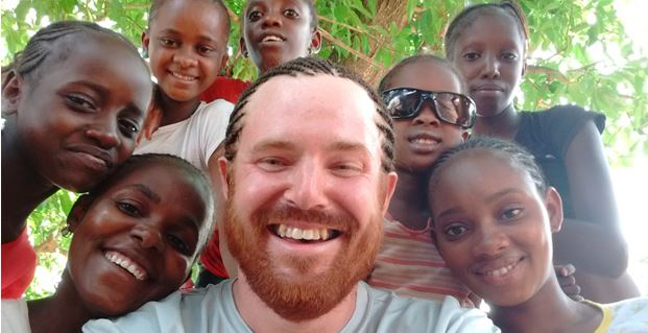 Above, Jason Brown ’13 takes a selfie with some members of his host family. Below, (top) farmers receive training on fruit tree maintenance, (middle) Brown with his good friends at their son’s ‘dennabo,’ or naming ceremony, where they named their baby after him, and (bottom) the head of Brown's host family and his son plant a cashew tree in their field. 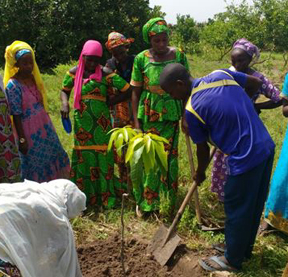 As a Peace Corps volunteer, Jason Brown ’13 lives in Senegal, West Africa. His village does not have electricity or running water, and he lives in a hut built from mud and cement bricks, with a roof made of grass. There for 27 months as part of his master’s degree program with Antioch University New England, Brown is an agroforestry volunteer in one of the poorest regions of Senegal, where the main source of income for families is farming.

Although Brown had been interested in serving in the Peace Corps and the cross cultural experience it offers for some time, it wasn’t until he heard more about it from one of his mentors at MCLA, Spencer Moser, the director of the College’s Center for Service and Citizenship, that he seriously began to consider it.

“Spencer Moser was one of the first Peace Corps volunteers in West Africa,” explained Brown, “I always enjoyed hearing stories about his service, and how it impacted him personally and professionally.” 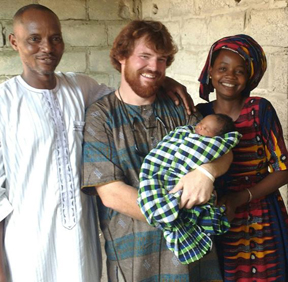 Most of Brown’s time is spent working with villagers in the area – including women’s groups and individual farmers – to increase their food security. Through agroforestry technologies, he incorporates trees and animals with traditional and improved agricultural practices to establish fruit tree nurseries. The various trees they produce – including mango, papaya, guava, pineapple and cashew – eventually are transferred elsewhere, to gardens and fields in the area.

Brown, who is interested in building resilient communities and sustainable development in the face of climate change, works with farmers to incorporate methods that reduce growing time, improved technologies such as live fencing that protect orchards and gardens from wildlife, as well as wind and fire breaks, which provide crop protection and increased soil fertility.

At MCLA, Brown majored in environmental studies and minored in geography at MCLA. As a freshman, he worked with other students to create the Environuts club, which worked to advance sustainability initiatives on campus. In addition to fun and educational programming at their weekly meetings, the students also helped to weatherize homes and manage invasive species in the local community. And, their advocacy and policy work included attending climate change rallies at the White House and Capital in Washington, D.C. 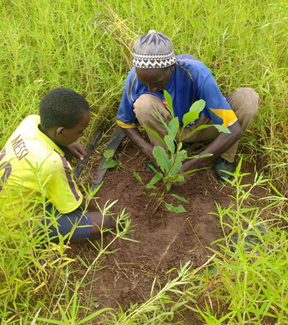 In addition to his involvement with the Student Government Association (SGA), which included serving as its president during his senior year, Brown traveled to Belize with Moser on an Alternative Spring Break trip. His experience in Central America was similar to what he does now in Africa. Like his work in Senegal, in Belize, he planted fruit trees to help a rural community impacted from multiple hurricanes that swept through the region the previous year.

“MCLA was the right choice for me,” Brown said. “The small class sizes and easy access to faculty and staff really enriched my educational experience.

"The combination of subject-specific learning, and other liberal arts requirements, allowed me to better understand the world we live in, and prepared me for my future work. The environmental studies courses proved to be a great foundation when I transitioned to graduate school. I firmly believe that a liberal arts education provides you with the necessary foundation, and increases your versatility in today’s global society.”