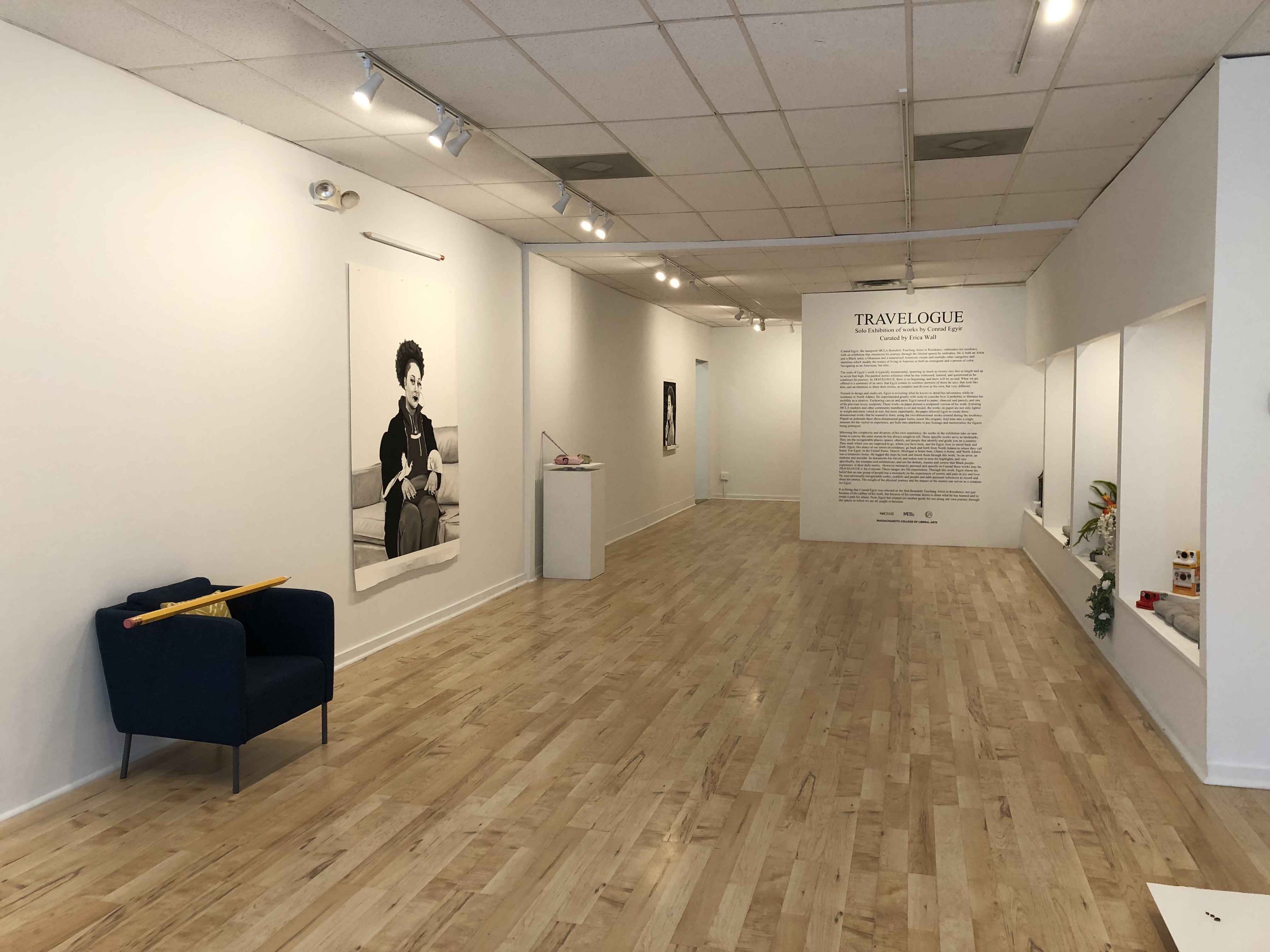 Conrad Egyir, the inaugural MCLA Benedetti Teaching Artist in Residence, culminates his residency with an exhibition that chronicles his journey through the liminal spaces he embodies. He is both an Artist and a Black artist, a Ghanaian and a naturalized American citizen and multiple other categories and identities which muddy the waters of living in America as both an immigrant and a person of color. Navigating as an American, but also…

The scale of Egyir’s work is typically monumental, spanning as much as twenty-two feet in length and up to seven feet high. His painted stories reference what he has witnessed, learned, and questioned as he continues his journey. In TRAVELOGUE, there is no beginning, and there will be no end. What we are offered is a summary of an entry that Egyir creates to combine portraits of those he sees, that look like him, and an intention to share their stories, as complex and diverse as his own, but very different.

Trained in design and studio art, Egyir is revisiting what he knows to detail his adventures while in residence in North Adams. He experimented greatly with scale to consider how it prohibits or liberates his mobility as a creative. Eschewing canvas and paint, Egyir turned to paper, charcoal and pastels, and one of his previous loves, sculpture. These works on paper present a sculptural version of his work. Enlisting MCLA students and other community members to sit and model, the works on paper are not only lighter in weight and more varied in size, but more importantly, the paper allowed Egyir to create three-dimensional works that he wanted to form, using the two-dimensional works created during the residency. Placed on pedestals these three-dimensional paper forms, much like origami, fold time into a single moment for the viewer to experience, are built onto platforms to pay homage and memorialize the figures being portrayed.

Mirroring the complexity and diversity of his own experience, the works in the exhibition take on new forms to convey the same stories he has always sought to tell. These specific works serve as landmarks. They are the recognizable places, spaces, objects, and people that identify and guide you on a journey. They mark where you are supposed to go, where you have been, and for Egyir, how to travel back and forth. Egyir, like many of our artists-in-residence, go back and forth from North Adams to where they call home. For Egyir, in the United States, Detroit, Michigan is home base, Ghana is home, and North Adams was a temporary home. He logged the steps he took and traced them through this work. As an artist, an explorer and recorder, he documents his travels and makes sure to note the highlights, and very specifically, the triumphs and celebrations, and not the defeats, trauma and sorrow that Black people experience in their daily reality.  However intimately personal and specific to Conrad these works may be,

TRAVELOGUE is for everyone. These images are life experiences. Through this work, Egyir shares his belief that no one group of people has a monopoly on the experiences of sorrow and pain or joy and love. He uses universally recognizable codes, symbols and people and adds personal references to record and share his entries. The weight of the physical journey and the impact of the mental one serves as a compass for Egyir.

It is fitting that Conrad Egyir was selected as the first Benedetti Teaching Artist in Residence, not just because of the caliber of his work, but because of his constant desire to share what he has learned and to create a path for others. Now, Egyir has created yet another guide for use along our own journey through the spaces in which we are all caught in between.

What happens if February never ends?

february is a digital collage series by Lorenzo Baker that expands and explores the definitions of Black History. Looking at history from a unique vantage point, the daily project offers viewers insight into what is commonly known as Black History Month.

The push for celebrating Black History Month began in the 1920s, with the work of Historian Carter G. Woodson, who proposed in 1926 that, "It is not so much a Negro History Week as it is a History Week. We should emphasise not Negro History, but the Negro in History. What we need is not a history of selected races or nations, but the history of the world void of national bias, race hatred and religious prejudice". Motivated by the achievements Carter. G Woodson, february extends the argument that the achievements, moments, and record of Black people should be commemorated well beyond the standardized 28/29-day long window.

Sourcing from the principles of Afrofuturism, which override western approaches to time, space, and meaning, february began by addressing the question “what happens if February never ends?” Utilizing historical photographs, documents, illustrations, and images sourced from the internet, the artworks bend the viewers understanding of what is worth historizing. As a daily meditation on Black History, each artwork blends and incorporates new or obscure information and data into depictions of well-known and unfamiliar icons within the black historical cosmos.