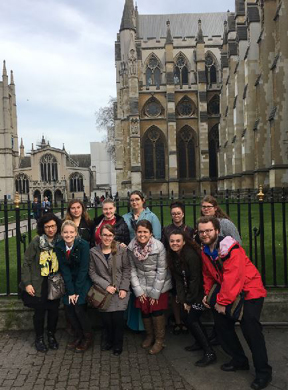 This past spring break marked a milestone for Dr. Rosanne Denhard. For the tenth time, she brought a group of her students to England to experience its history and culture.

As part of her “Arts of Medieval & Renaissance Britain” class, they explored landmark sites such as Kensington Gardens and Hyde Park, the River Thames, Westminster Abbey, Clifford’s Tower on the site of William the Conqueror’s original castle, and a variety of British art galleries and museums. They also took in some theatrical productions – including Shakespeare, of course!

Katherine Duval ’19 of Long Island, N.Y., has devoted a large portion of her undergraduate studies to English literature, so traveling to England provided her with opportunities to contextualize what she learned in the classroom, and to interact with the culture in a direct way.

In addition to researching the history of English portraiture in the 16th and 17th centuries, she wrote a series of poems inspired by particular works, to see how well art might portray a person through the filters of the artist, time, and culture. Before the trip, Duval was limited to viewing the portraits on her laptop.

“The ability to see many of the portraits I have been studying online, in person – at The National Portrait Gallery and The Victoria and Albert Museum – allowed me to interact with the art in a way that is simply not possible through the screen or on the page,” Duval explained. “I was able to draft several poems while literally standing in front of the work on the wall, which made all the difference in how I observed and interpreted the paintings.”

As Denhard’s teaching assistant, KiLee Fortier ’18 of Northbridge, Mass., participated in the travel study portion of the class for the second time. “I wanted to ensure that a new group of student scholars experienced everything that the course and England had to offer. England is so rich in historical sites and the arts that, no matter how many times you visit, you will always find a new experience,” she said.

Fortier’s favorite part of the experience was a visit to the Jorvik Viking Center in York. “York is truly a step back in time, and as a history major, it was like a dream,” she said. “The artifacts on display also contributed to our understanding of Vikings and Viking culture in a way that you cannot get from a picture in a book.

Other than a trip to Canada with his family when he was very young, Michael Masley Hannett ’19 of Albany, N.Y., had never traveled outside the United States. In England he aimed to learn more about Gregorian chants, which he considers one of the great origins of Western music. There, Hannett was invited by a London expert to visit his church, and see a choir in action.

“Now I know how to sing Gregorian chants, and how to help other people sing them! I could have learned it in America, sure, but I talked with an actual expert from England face-to-face, and asked in-depth questions. I couldn't have done that without this course. I took home with me the spirituality, the tranquility, and the appreciation of the Gregorian chant,” Hannett explained.

“England was overall just an amazing experience. I’m so glad I went. I made a community of close friends I'll never forget. I learned about another culture far more than I could have in a textbook or from a website. ... I'll never forget it.”