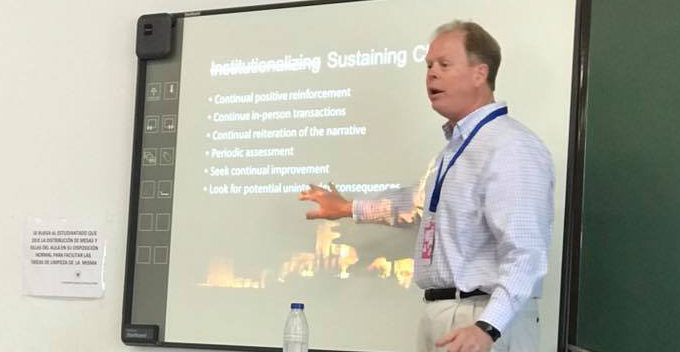 Thomas Whalen, Ph.D, at his presentation in Granada, Spain, this summer.

Dr. Thomas Whalen, associate professor of business, was just one of the MCLA faculty members who spent part of their summer sharing their work at multiple conferences. He presented a paper titled, “It’s All Liquid: Applying Social Transaction Theory to Organizational Culture and Culture Change” in Granada, Spain, at the 13th International Conference on Interdisciplinary Social Sciences, as well as in Peabody, Mass., at the Academy of Business Research.

The paper describes a theory Whalen introduced last fall with the publication of his book, “Complexity, Society and Social Transactions: Developing a Comprehensive Social Theory,” which explains how people come together to form society, culture, and the economy.

“There has been a very problematic approach to managing and changing organizational culture since the late 1950s called ‘Change as Three Steps,’ or ‘CATS’,” Whalen explained. “This approach sees culture as something that a manager can freeze, change, and then refreeze at will. The result has been some disastrous corporate mergers and questionable business practices.”

Because his presentation provided a theoretical foundation with regard to why CATS is flawed, Whalen then described a different type of managerial approach that he believes would be more successful.

The conference in Spain drew an international audience of social science professors from throughout the world, and Whalen’s presentation attracted faculty from universities in Montana, Virginia, Wales, Nigeria, Kenya, Australia, Spain, Turkey and Israel. In addition to receiving positive feedback on his work at both conferences, the presentation in Spain allowed him to develop some international connections.

Whalen next plans to write up the final version of his paper, with an expected publication date set for next year. Even sooner, graduate students enrolled in MCLA’s Master of Business Administration (MBA) program also will benefit this fall, as he will share with them his presentation and a draft version of the paper.