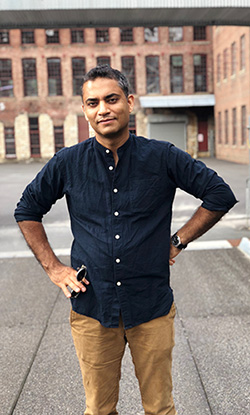 As tensions flare in Kashmir, the world is watching, and it wants context. Enter MCLA Anthropology Professor Mohamad Junaid.

Junaid, who grew up in Kashmir, a state long affected by the interests and actions of India, Pakistan, and China, and who has spent much of his academic career studying the political conflict there, regularly speaks on this topic and appears in news articles from Public Radio International to Turkish news channel TRT World.

After earning his bachelor’s and two master’s degrees in India, Junaid completed his cultural anthropology Ph.D. at the City University of New York (CUNY) Graduate Center. His dissertation, with support from the Wenner-Gren Foundation and the Social Science Research Council, centered on ethnographic research of young activists in Kashmir and how they have been affected growing up inside an often-violent conflict that has long restricted their freedom of movement.

“My research came from a desire to give voice to the people who live there,” Junaid said. “I was disappointed by how there was too much focus on nation-states rather than on communities, or on people—especially the marginalized, disempowered, and dispossessed. I wanted to study formation of political subjectivity among young Kashmiri activists: How did they understand their position, vis a vis the claims being made on their homeland?”

“Part of the research shows me many youth in Kashmir grow up with experiences of trauma and violence,” he said. “And they internalize that fear and subjection to violence that the occupation of Kashmir imposes on society. It has created a society that has to persistently deal with chaos and disorder—where abnormal has become normal.”

Though Junaid regularly speaks on Kashmir and appears in news articles, a particularly violent year has resulted in increased media attention. In 2019, he has given talks at NYU, Columbia University and at The People’s Forum in New York City; written new articles and book chapters; and offered his perspective via many news outlets.

“Since February, with war clouds growing again—India and Pakistan are both nuclear weapons countries. If they start using them, everybody on planet Earth is in danger,” he said. “In these times, people get more interested in Kashmir and they reach out. Not only to me, but to researchers in the region. It’s my scholarly responsibility to use my expertise and research to educate the public about a conflict in Kashmir getting out of hand, and potentially turning into a nuclear war.”

“It has taken me and my colleagues who work in the region continuous work in the public sphere to raise interest in this,” Junaid said. “It’s important—not only that Kashmiris have their rights, which is my primary interest as a Kashmiri—but because peace and justice in Kashmir would mean peace for South Asia.”

As his academic work expands, Junaid brings his perspective back to his students in courses like Anthropology of Violence and Visual Anthropology. The experiences of Kashmiris can be related back to other current and historic events—the restricted movement of slaves in the United States, of Africans during Apartheid, or the recent experiences of refugees trying to come to the U.S. from South America, for example. “What I try to do, rising from my own personal experience to my scholarship—I keep my experience in check, and take that even higher,” he said. “I want to connect it with research around the world. That’s what I try to bring into my classroom.”