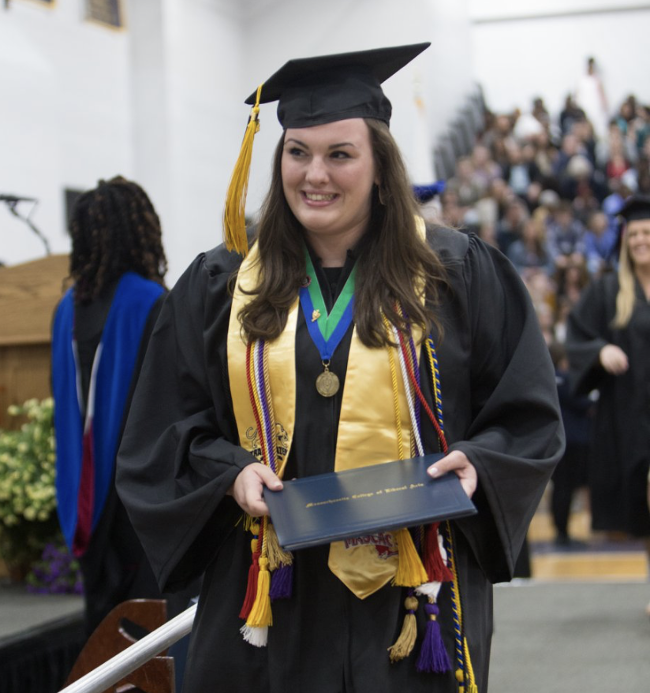 Brianne O’Rourke '17 always enjoyed math, and had taken accounting classes in high school—but her connection with MCLA Assistant Professor Tara Barboza was what ultimately made her stick with the College’s accounting program.

A couple of years post-graduation, Brianne O’Rourke ’17 is moving up in her career as an accountant: in June 2019, she was promoted to assistant controller at Waste Connections, a waste services company that operates across the U.S. and Canada.

Working out of the company’s Clifton Park and Seneca Falls, N.Y., offices, O’Rourke now works alongside her district manager to project the next three months’ revenue and expenses, and gauge how closely Waste Connections is doing according to those projections on a monthly basis. “Our goal is to be within 1 percent accuracy,” O’Rourke said.

O’Rourke’s new role “actually reminds me a lot of my SGA (Student Government Association) treasurer days,” she said. “It's like a constant budget season, but for a real live company. I love that I get to work with all the people in the business to figure out how to make a profit. I feel like I have a role to play in our business rather than being run by someone above me.”

Previously, she was working in accounts payable; before joining Waste Connections in November 2018, she worked at West and Company CPAs in Saratoga Springs, N.Y., doing public accounting work.

Working for an international company also has its perks—“the company I work for makes sure we have fun,” O’Rourke said, “Since I started seven months ago, I’ve gotten to go on trips to Texas, Tennessee, Chicago, Ill., and Florida.”

O’Rourke always enjoyed math, and had taken accounting classes in high school—but her connection with MCLA Assistant Professor Tara Barboza was what ultimately made her stick with the College’s accounting program. “I was convinced because I loved taking her classes, and I learned so much from her!” she said. “Now I’m lucky enough to still have her as a mentor.”

Along with the mathematical details, “I definitely draw on my education,” in her career, O’Rourke says. “We’re a publicly traded company, so there‘s nothing more important than being honest in the financial statements. (At MCLA) I distinctly remember talking about integrity, and that is something that gets brought up almost daily at my job.”

A former captain of MCLA’s volleyball team, O’Rourke is also still in contact with former MCLA teammates. She also happens to live with her randomly assigned freshman-year roommate today—in a condo she purchased shortly after graduating. “I hope to invest in my next place within the next five years or so, which I can do because of the affordable education I got at MCLA,” she said.

Beyond that, she plans to stay at Waste Connections. “I wanted a career that I could grow up in, and business seemed like the way to go,” she said. “In the future, I hope to grow with this company. I have loved it so far.”