Touring with the American Shakespeare Center 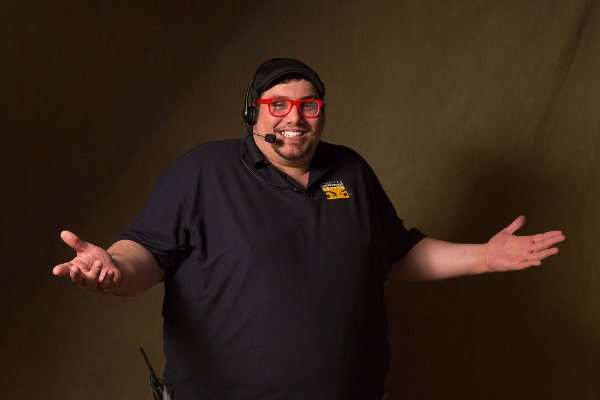 This year marks '08 grad and stage manager Thomas J. Coppola's fourth tour with the American Shakespeare Center, and his ninth national tour since 2012.

Seven months out of the year, you’ll find Thomas J. Coppola ’08 on the road with the American Shakespeare Center, based in Staunton, Va. If you’re lucky enough to catch a production of the company’s 2018/19 Hand of Time tour, take a moment to look for him in the details.

This year marks his fourth tour with the company, and his ninth national tour since 2012. As tour manager, “my job is to keep the three shows (William Shakespeare’s The Comedy of Errors, The Winter’s Tale, and Sophocles’ Antigone) in repertory true to the director’s vision, but also to safely get my team from Point A to Point B,” he says.

Growing up in Pittsfield, Coppola remembers seeing MCLA Admission counselors at his high school, and initially decided to attend for a while before transferring to a competitive acting school. “I fell in love and was able to realize I preferred being back stage rather than on stage,” he says. At the acting school to which he was accepted, “you don’t even get to touch the stage until junior year. So I would have wasted time—and money—realizing it’s not what I wanted to do.”

As he explored stage management in MCLA’s Fine and Performing Arts Department, he took tech classes and worked on performing arts shows as much as possible. “I didn’t just call shows. I could read a light plot, build a platform, run a sound board… never did get my basting stitch perfect, though,” he says. He ultimately double majored in fine and performing arts and arts management, with a theatre concentration.

At the same time, Coppola was establishing Yorick, MCLA’s Shakespeare Club, which is still active today, putting on shows every year. Coppola says that adjunct English/communications professor Kellie Newby, the club’s advisor, “was monumental in her support, both of the club, and in my desire to continue directing and stage managing.”

And so, he did. “By the time I began applying for internships, I had already stage managed two professional operas, a handful of college productions, and directed a few other shows,” he says. His first internship with Barrington Stage Company led to a job as youth production stage manager; he ended up there for five seasons, holding his young actors to the same professional guidelines as the adult actors on the main stage.

After being offered an assistant stage manager spot at Barrington Stage just before show rehearsals were to begin, Coppola had one loose end to tie up—Commencement. “I finished the ceremony, took a few photos, then drove to tech rehearsal in Pittsfield, still in my cap and gown, for the first preview that night,” he said.

One thing led to another: After leaving Barrington Stage, he worked for several regional theatres on the East Coast, ultimately landing a touring gig with a company in Boston doing educational shows. That led to additional tours with a Theatre for Young Audiences company in Philadelphia, and finally to American Shakespeare Center, home of the Blackfriars Playhouse, the world's only recreation of Shakespeare's indoor theatre.

“Touring is amazing,” Coppola says. “Getting to see the country and meet new people is one of the coolest perks for a job ever. I love the challenge of working with new contacts at each of the venues, and figuring out how to adapt our show and what needs to change, what can stay, etc. It keeps the experience fresh and new. It’s also really cool seeing what 400-year-old jokes might land in one area of the country and not in another.”