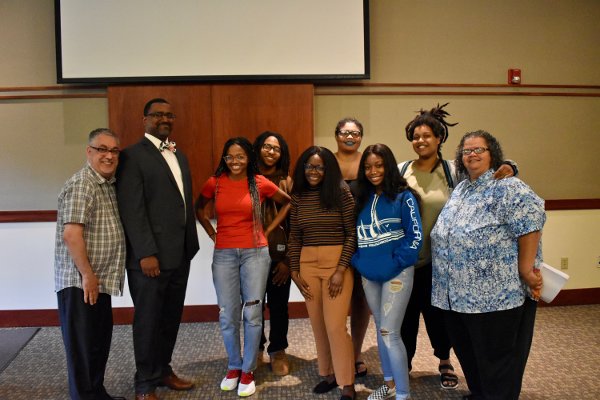 What are your rights when a police officer stops you on the street? When you show up to vote, can you legally be turned away? Do immigrants have Constitutional rights in this country? What does “due process” really mean in a courtroom setting?

You may know some of the answers to these questions, but it’s always helpful to know more. That was the goal of a series spearheaded by MCLA Dean of Student Success and Engagement Theresa O’Bryant, held this fall at MCLA. Street Law: Mini-Lessons for an Educated Citizenry, held from September 19-30, consisted of six one-hour presentations by lawyers currently practicing in the field.

The education series was made possible through a federal grant initiative focused on civics. O’Bryant wrote a proposal for a series based on the real-life experiences of students, one that would give them an opportunity to gain legal knowledge, skills, and confidence to become even more civically engaged community members. “Without knowledge,” said O’Bryant, “student populations can tend toward civic disengagement and unfair treatments.”

The mini lessons were open to all students as well as the public, and all of them centered on today’s hot law topics. O’Bryant said they are subjects that students, especially students of color, feel challenged by on a day-to-day basis. The goal of the series was to have students learn something that they didn’t know that would make an impact on their everyday lives.

The series began with Iranian American attorney Soudie Tahmassebipour, who spoke on the law of search and seizure. Former Metropolitan police officer and investigator Arnie Lucinda Stewart, public defender division managing director for the northeast region of Massachusetts, tackled stop and frisk laws. Criminal justice reform and voting rights were discussed by Rahsaan Hall, the director of the racial justice program for the American Civil Liberties Union of Massachusetts. Sara Lowry, the staff attorney at the U.S. Committee for Refugees and Immigrants, spoke on the U.S. immigration system and its history. Berkshire County District Attorney Andrea Harrington spotlighted police and prosecutorial discretion and how those determinations are made. The last to speak in the series was renowned criminal defense attorney Denise Regan, who shared real-life stories that illustrated the critical role of due process.

These were “practical law lessons,” said O’Bryant, “in a very palatable format, designed to boost students’ knowledge and build life skills — conflict resolution, analytical thinking, communication — and to help students who were interested in advocacy see how they could be impactful.” All of the speakers are lawyers, but discussed things in their past that made them want to get involved with issues related to justice. “The justice component,” said O’Bryant, “is deeply wed to racial disparity, and it plays out with the police and prosecution very clearly. Knowing the history helps you understand how this all happens, so we’re better able to dismantle the wrongs.”

O’Bryant had support in the planning of Street Law from MCLA Title IX Coordinator Nicole Comstock, MCLA Chief Diversity Officer Christopher MacDonald Dennis, and Assistant Dean of Students Celia Norcross. All participating students received a pocket copy of the United States Constitution, a document every speaker touched upon in some way.

O’Bryant said students appreciate hearing from people who are out there doing a job in which they’re also interested. Although these speakers are highly accomplished, she said, “even ordinary people can do extraordinary things.”